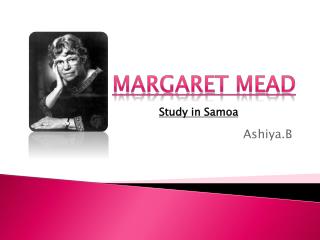 Margaret Mead. Study in Samoa. Ashiya.B. About Margaret Mead. Mead was born on December 16, 1901 She was a Cultural Anthropologist.

Always remember that you are absolutely unique. Just like everyone else. Margaret Mead - . it is difficult for us to

Change the World - . the acts of the apostles. “ never doubt that a small group of thoughtful, committed citizens can

Never doubt that a small group of thoughtful committed citizens - Can change the world; indeed it’s the only thing

What is Anthropology? - Anthropology is the broad study of humankind around the world and throughout time .  it is

The Self and Others: An Anthropological Approach - . october 22, 2010. agenda. colours of society introduction to self: