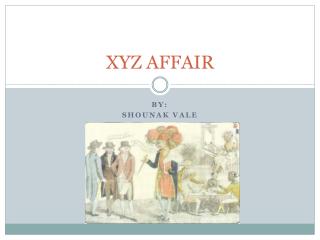 XYZ AFFAIR . BY: SHOUNAK VALE. What was the XYZ Affair.

Chapter 9 Quiz 4 Review - . the immediate result of the chesapeake affair was the war of 1812 the embargo act macon’s

1. George Washington - . - set precedents for presidents -selection of a cabinet to advise him -whiskey rebellion

INTERVIEWING - . the opportunity. always be ready to interview could be casual or formal could be in a store or on a

Act IV, Scene i - . iago tells othello that cassio has told him of his affair with desdemona. he agitates othello with

Trofim Lysenko and genetics in Soviet Russia (1927-1962) - . bibliography v. soifer, lysenko and the tragedy of soviet