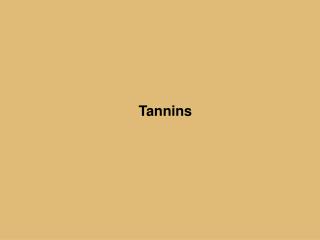 Tannins - . they are high molecular weight phenolic compounds capable of precipitation of animal proteins in hides and

TANNINS - . tannins tannins is a substance found naturally in many different plants, most in grapes and tea leaves

Hydrolyzable Tannins vs. Condensed Tannins - . catechin - a type of flavanoid. a) hydrolyzable tannin b)