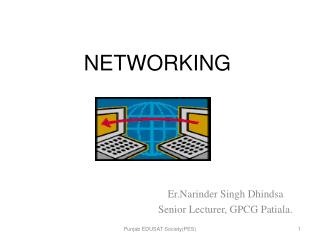 NETWORKING. Er.Narinder Singh Dhindsa Senior Lecturer, GPCG Patiala. Networking. Connecting two or more computers in such a way that they can share softwares and hardwares is called Networking. Networking enables a group of computers to share information, hardware and software application.

Innostack| The Training and Networking Hub - At innostack we train students, boost them and we will be there to hold your

CS 313 Introduction to Computer Networking &amp; Telecommunication - . (teach yourself) the tcp/ip internet (in 60

Introduction to networking ( Yarnfield ) - . static routes. objectives. describe what a static route is define what