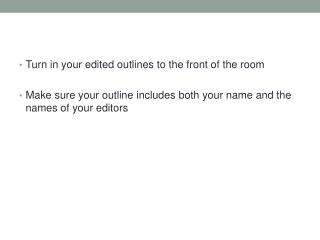 Turn in your edited outlines to the front of the room

Turn in your edited outlines to the front of the room Make sure your outline includes both your name and the names of your editors. Language and Grammar. ICS 139w 08/15/11. What is a grammar?. “The whole system or structure of a language”

Turn in your edited outlines to the front of the room

Position and direction Maths - . for room 3 clever clogs. we are learning to s ay, read and act out p osition words. we

CLASSIFICATION OF GUESTROOMS - . according to number of beds:. single room – a room with a single bed, and is sold to

So you have to give a speech… - . you will be graded on the following: eye contact volume rate/speed poise/posture Evaluation - . bradley simpkins. forms and conventions taken from other products. i had taken a fair bit of reference

Rethink Financial Thought Leadership: How to Crack the Activation Code - A panel of financial marketers and content