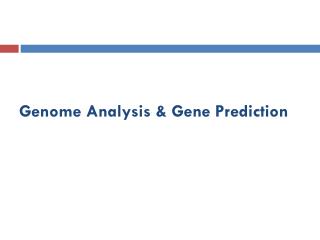 A Comparison Study of Whole Genome Sequencing (WGS) in Clinical Setting - In recent years, with the further development Whole Genome Sequencing in a Nutshell - Whole genome sequencing or wgs is the technique of complete genome analysis.

An Introduction to Genome Classification, Analysis and Annotation - . genome analysis: from sequencing to annotation. the

The Human Genome - . the international human genome consortium initial sequencing and analysis of the human genome

Cancer Genome Analysis - . presented by karen xu. introduction. cancer is commonly referred to as the “disease of the

PineRefSeq : Conifer Reference Genome Sequencing - . an adaptive approach to the sequencing of the large genomes of