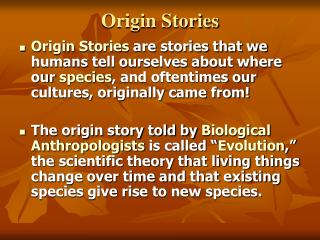 Origin Stories. Origin Stories are stories that we humans tell ourselves about where our species , and oftentimes our cultures, originally came from! Achievement in America: The Numbers and the Stories They Tell - . daria hall &amp; brooke haycock, the education