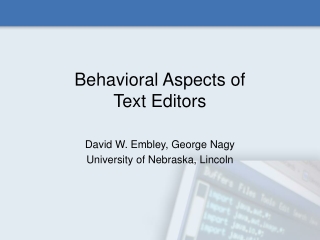 Unix Text Editors - Intro to unix spring 2000 shells. 2. the vi command. vi is a visual text editor. most of you are too

ITU-T SG 17 Information session for Rapporteurs/Editors and other ‘officials’ of the Study Group - . geneva, 23

Free Photo Editors - These free photo editors are also simple to use plus they each have some distinguishing features.

Why editors need to be concerned about publication ethics - . elizabeth wager , phd chair, committee on publication

Chapter 8: Builders And Editors - . whether providing the user with an application to create and/or edit text, tables,

Sundance Editors - . by ben stringfellow. overview. what is editing? interviews with editors editing to music some fun

Ontology Editors - . ides for ontologies. some people use simple text editors doing this with the xml serialization will

Unix Session IV - . text editors. a text editor is a type of program used for editing plain text files in unix we have