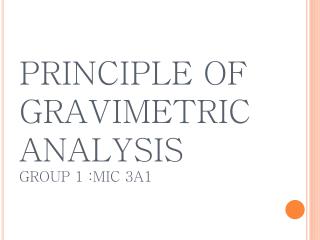 PRINCIPLE OF GRAVIMETRIC ANALYSIS GROUP 1 :MIC 3A1. GRAVIMETRIC ANALYSIS. Gravimetric analysis is one of the most accurate and precise method of macroquantitative (large quantity) analysis. In this process the analyte is selectively converted into insoluble form. Gravimetric Determination of Iron as Fe2O3 - Purpose. to determine the amount of iron (iii) in a sample of unknown using

Gravimetric Analysis a. simple, very little equipment or training is required b. fast c. can be fairly spec

Why is Cost-Benefit Analysis So Controversial? - . robert frank. the cost-benefit analysis principle. cba: the right