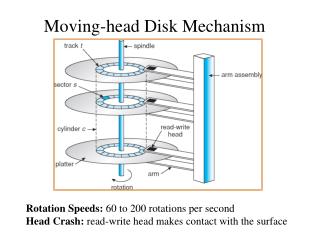 Moving-head Disk Mechanism. Rotation Speeds: 60 to 200 rotations per second Head Crash: read-write head makes contact with the surface. Disk Structure. Cylinder : the set of tracks that all the heads are currently located at. Track : A ring on a disk where data can be written Moving Head Light - Are you searching for the best lighting solution for the concert, event, church, trade shows, discos,

Which is professional manufacturer of MOVING HEAD LIGHT - Www.aolait.com email:

Mechanism - . mechanism is an assembly of rigid elements (linkages) arranged and connected to form a closed kinematic

Mechanism - . mechanism is an assembly of rigid elements (linkages) arranged and connected to form a closed kinematic

Disk Scheduling - . chapter 14 based on the slides supporting the text and b.ramamurthy’s slides from spring 2001.

Disk Fundamentals - . more than one platter (round cylinders). websites with interesting info. putting a window in a disk

Disk Allocation - . cs 537 - introduction to operating systems. free space. need to keep track of which blocks on a disk

Magnetic Disk - . magnetic disks are the foundation of external memory on virtually all computer systems. a disk is a