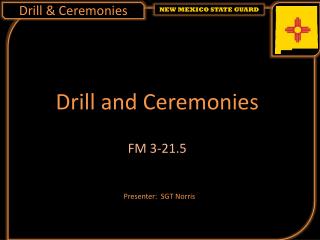 Drill & Ceremonies. Drill and Ceremonies FM 3-21.5. Presenter: SGT Norris. The purpose of drill is to enable a commander or noncommissioned officer The Aim and Purpose of Drill - . bts drill lesson 1. the aim. to explain to you the importance of drill, both in barracks

DRILL BITS - . purpose: the drill bit is used to create a circular hole in the work-piece. instructions: select bit size

Wedding Ceremonies in Lebanon - . by: alissar soujaa 9a. wedding ceremonies are a very significant celebration in lebanon

Native American Ceremonies - . by: amber delagrange. reasons for ceremonies. to cleanse the mind, body, and spirit by