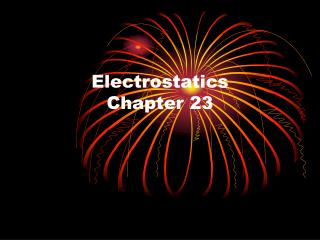 Electrostatics Chapter 23. Most classes will begin with a slide similar to the following. What’s Happening. Clicker use will start on Friday (maybe). We will use them today informally. There will NOT be a quiz this week. There WILL be a quiz a week from Friday.

Particle model of electrostatics: - . charge is a particle that is conserved – can’t be created or destroyed. two Book of Acts Chapter 23 - . theme:paul’s defense before the sanhedrin. acts 23:1. and paul, earnestly beholding the

Chapter 23 – Electric Potential - . what is the value of employing the concept of energy when solving physics problems?

Laws of Electrostatics - . electrostatics: . it is a branch of physics that deals with the phenomena and properties of

Electrostatics Chapter 23 - . week-1-2. what’s happening. clicker use will start on friday (maybe). today we begin the