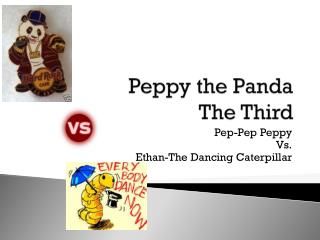 Peppy the Panda The Third Peppy the Panda The Third

Why The Panda Is Half Black - . by hannah. long ago , the panda was snowy white all over. almost every day, panda would

Towards the integration of the Micro Vertex Detector in the PANDA experiment - . daniela calvo infn – sezione di torino

The pandas - . travis pepin. two unique mammals. two mammals in china and its surrounding countries are the giant panda