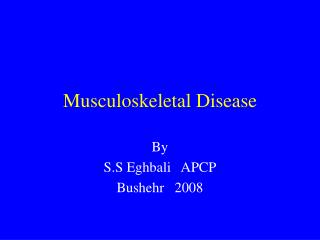 Musculoskeletal Disease. By S.S Eghbali APCP Bushehr 2008. Normal Skeletal System. The skeletal system is as vital to life as any organ system because it plays an essential role in: 1) mineral homeostasis 2) houses the hematopoietic elements ERGONOMICS Recognition of Work-Related Musculoskeletal, Nerve Disease - . what is ergonomics?. ergonomics is the science

The Approach To A Patient With Musculoskeletal Disease - Introduction. 315m doctor visits and 8m hospital admissions per

Musculoskeletal - . development. children are more likely to fracture than sprain ligaments are stronger than bone until