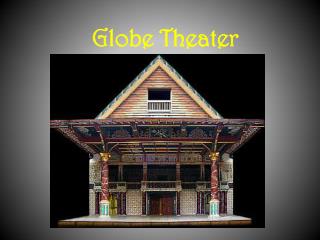 Globe Theater. The Globe Theatre was constructed in 1598. It became one of four major theaters in London. The others were the Swan, the Rose, and the Hope. (Modern day replica opened in 1997).

Shakespeare’s Globe Theatre - . shakespeare's globe was the most popular english theater of its time, frequented by

THE GLOBE THEATER - . summer. amanda. irina. playhouses in general. each theater has it’s own flag that gets raised on

Intro to Shakespeare - . quiz game. all of the following are theaters which were located in the northern suburb of

THE GLOBE THEATER - . the globe theater. by the mid-16 th century, the art of drama in england was three centuries old,

Greek Theater - . by michael, lauren, and linda. history of greek theater. in the theater, there were almost always three

The Greek Theater - . a look at the development of theater as a literary art form. fathers of the greek theater. thespis:

May 13 – Theater of the Absurd - . who’s on first? characteristics of theater of the absurd close reading and

The Globe Theater - . the globe. i. opened in 1599 ii. located on south bank of thames river iii. also called the