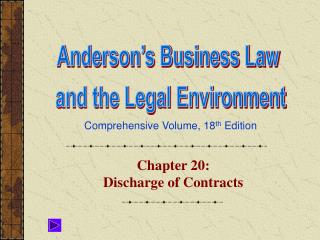 Chapter 20: Discharge of Contracts. Conditions Relating to Performance. If the occurrence or non-occurrence of an event affects the duty of a party to perform, the event is called a condition . Condition Precedent is a condition that must occur before the party is obligated to perform. Syphon - . syphon is a structure constructed at the intersection of two waterways. syphon carries the discharge of one