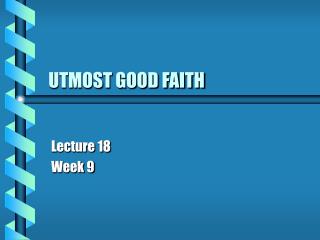 UTMOST GOOD FAITH. Lecture 18 Week 9. UBERIMMAE FIDEI. Contracts of insurance are fiduciary contracts - they involve a promise. This means they are contracts “uberrimae fidea” - contracts of the utmost good faith This doctrine accepted to different degrees in most common law countries. What Good is Faith? - . having heroic faith in the harsh realities of life sunday, april 25,

“Fight the Good Fight of Faith” - . 1 timothy 6:12. the defining spirit of our age. tolerance of evil disdain for