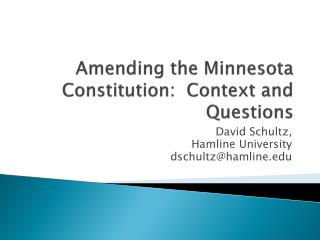 Amending the Minnesota Constitution: Context and Questions. David Schultz, Hamline University dschultz@hamline.edu. Questions about amending the Constitution. What is Minnesota’s history with amendments? What has happened in other states ? Context for Teaching - . module a. reconnecting to skill building. reflect on the knowledge and skills learned in

GOVERNMENT - . chapter 12 and 13. question. which of the following is true regarding the georgia constitution ? georgia

Illinois Constitution Unit - . your illinois constitution packet. make sure your name is on it. bring it every day we

Review Questions - . based on the idea of federalism, can individual states tell the federal government what to do?. no.

National Survey of Student Engagement - . university of minnesota, morris. nsse 2004. program overview. what is nsse and

The Constitution of the United States - . motivation. the framework for our government is over 200 years old. today,