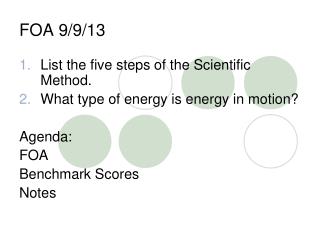 FOA 9/9/13. List the five steps of the Scientific Method. What type of energy is energy in motion? Agenda: FOA Benchmark Scores Notes. Forms of Energy. EQ: Can I recognize different types of energy transformations?. Nature of Energy. Energy is all around you! FOA 2/21/13 - . what is the difference between instinctive behavior and learned behavior? give one example of each. name

FOA - . week 6. purpose 9 /15/14. foa. copy the words and the definitions into your vocabulary section of your

FOA - . what are your first impressions of lms? name the last school you attended what do you think the word jalopy

FOA - . what does this saying mean to you- “you do not know what i have been through because you did not walk in my

FOA - . foa sit at your original number correct these. 1. here are the fifty-dollar bill that i promised for pet sitting

FOA - . purpose. what is the most amazing thing about you? which of your friends would you consider your best friends?

Monday, 9/9/13 - . good morning! please remember to get your folder. take out everything from your folder and place it

Agenda 9/9/13 - . collect test repairs - on black rolling cart answer sheets on top of corrections in one pile copies of