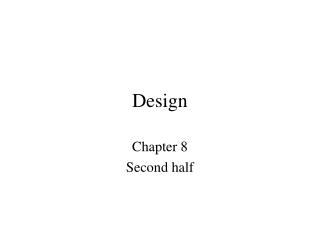 PRE-DESIGN DESIGN - . “what might be some examples of pre-design design be?”. randa elkhalil mosab ajina justin chan.

DESIGN - . good design helps the reader focus on content!. how to enhance readability. dominance: achieved by making a

Design - . designing is the creative activity of transforming the requirements into solutions the description of the