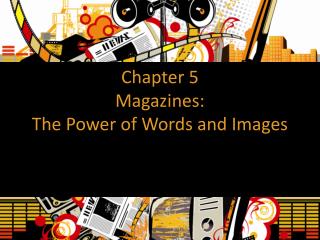 Chapter 5 Magazines: The Power of Words and Images. Early Magazines. What is a magazine? A publication of lasting interest targeted at a specific audience. A collection of articles. 1704: Daniel Defoe founds The Review. Commonly considered the first magazine. Chapter 7: Representation and Manipulation of Knowledge in Memory: Images and Propositions - . cognitive psychologists

1. Define important words in this chapter - . ambulation walking. dangle to sit up with the legs over the side of the

Working With Images - April 21, 2005 why this workshop? to end the frustrating hours spent trying to print posters. to

Developing a Marketing Strategy and Marketing Plan - . chapter 9. what memorable impression is nabisco trying to leave

Semantics of words and images - . presented by gal zehavi &amp; ilan gendelman. what is semantics?. semantics – “

Chapter 3 - . electricity and power supplies. you will learn…. how electricity is measured how to protect your computer

ADVERTISING MEDIA Chapter 20 - . the average person is exposed to more than 2,000 ads per week. advertising. advertising