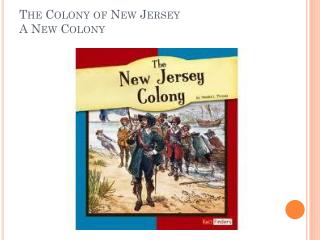 The Colony of New Jersey A New Colony The Colony of New Jersey A New Colony. Governor Nicolls and Albania. Richard Nicolls became the governor of the Dutch colony of New Netherland in 1664. He gave part of the colony that was west of the Hudson River the name Albania which is today called New Jersey.

The Colony of New Jersey A New Colony

The Bare Essentials AP Review PowerPoint - . in 1620 this became the 1 st agreement for self-government in america.

Mayflower Compact - . agreement signed in 1620 by the pilgrims in plymouth, to consult each other about laws for the

Terms and Names Units 1 - 5 - . created by a group of investors to establish the jamestown colony in 1607. virginia

Creating a Accident Free Work Environment - . why not set your goal to zero!. presented by: betty knox. the swiss colony

Non Profit Organizations: IRS and New Jersey Requirements - This outline was created for the new jersey pta for their