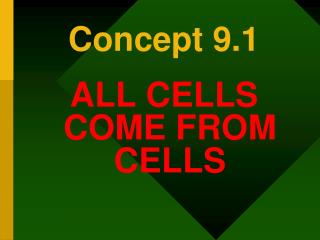 9.1 - . sampling distributions. parameter. a number that describes the population symbols we will use for parameters

9.1 - Respiration and motor system. 9.1. 9.1 the importance of an oxygen delivery system. breathing : is the process that

9.1 - . key concept cells come from other cells. roles of cell reproduction replacement or repair of lost or

9.1 - . basic combinatorics. what you’ll learn about. discrete versus continuous the importance of counting the

Communication 9.1 - . the key. communication is the key to ensuring strong partnerships and a successful school

9.1 Translations - . identifying transformations. figures in a plane can be reflected rotated

L 9.1 - Examples of good &amp; bad practice: effect of the wedge filter and field size in the skin dose distribution.

Chapter 9.1 - . forces and buoyancy. force. an influence that causes an  object  to undergo a change in motion