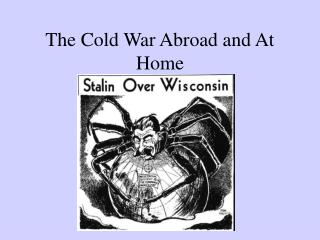 The Cold War Abroad and At Home

The Cold War Abroad and At Home - PowerPoint PPT Presentation The Cold War Abroad and At Home

POST WW2 CAUSES OF THE COLD WAR - . friends for now. war of the wills. truman is determined not to appease stalin

The Close of World War II - . as world war ii approached the end, the us, british, and soviets could not resolve the

Cold War at Home - . atmosphere of fear is created in us by events at home and abroad 1947, truman creates the loyalty

Canada at War: Battles of WWII - . battles of wwii. the battle of britain - after france fell, germany launched operation

Chapter 26 The Cold War Abroad and at Home, 1945-1960 - . goal statement. after studying this chapter students should be

Unit 4 : WWI, The Great Depression, and WWII - . the causes and effects of world war ii. have you seen these pictures

Application Process of Student Visa [F1 & M1 Visa] - Who are planing to study in abroad, they must need student visa