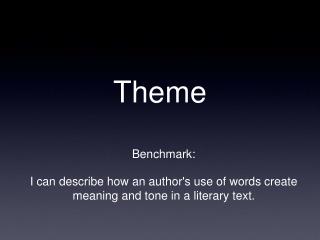 Theme. Benchmark: I can describe how an author's use of words create meaning and tone in a literary text. Theme : Life lesson, meaning, moral , or message about life or human nature that is communicated by a literary work. In other words… Theme is what the story teaches readers.

Themes and Motifs in Oedipus Rex - . theme of free will versus fate. central theme – tension between individual choice

What is theme? - . the book thief mini lesson. definition. with your elbow partner, write down your top three definitions

Theme - . notes: a lesson or central message of a story. it can be stated or inferred. usually a life lesson. can be

Theme - . a central message, concern, or insight into life expressed through a literary work can be expressed by one or

Theme From Greensboro Day School - . theme defined. a central idea or “truth” that a work of literature expresses a

What is a Theme ? - . theme : life lesson, meaning, moral , or message about life or human nature that is communicated by

Topic and Theme Poetry Day 3 - . “mending wall”. topic. the general subject of the poem. a complete sentence that

Theme - . a broad idea, message, or moral of a story. the message may be about life, society, or human nature. themes

THEME - . mini-lesson. good readers can identify the theme of a fictional story. the five literary elements found in all

Theme - . what exactly is this elusive thing called theme?. theme. the theme is the author’s message about life or

Theme - . a subject of discourse, discussion, meditation, or composition the need for world peace was the theme of the

Theme - . theme is: • the central, underlying, and controlling idea or insight of a work of literature. • in a fable

The Theme - . shakespeare toys with the idea that fate or destiny is a supernatural power predetermining the path of

THEME - . the central idea or universal message implicitly stated in a piece of literature. it is the author’s