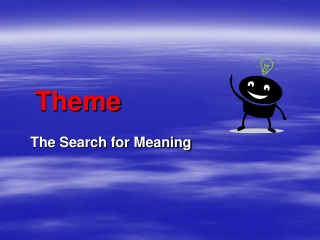 Theme. The Search for Meaning. What is a Theme ?. Theme : A life lesson , a meaning , a moral , or message about life or human nature that is communicated by a literary work In other words… Theme is what the story teaches readers. Themes. Theme - . the message or the main idea of the story. the necklace. the theme of the necklace - is that she learned that