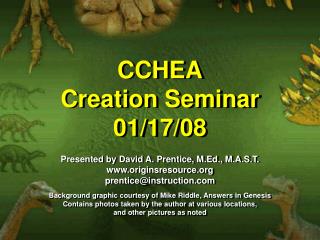 Value creation from IS Integration: From ASP to Web Services? - . wendy.l.currie warwick business school presentation at

God’s Work of Creation - . august 24. what about you …. what have you always wanted to make but never tried? we are

Creation to Flood - . genesis 1:1 “in the beginning god created the heavens and the earth.”. creation is subjected to

CREATION AND THE ORIGIN OF HUMAN CULTURE - . the idea of creation includes the concept that god is distinguishable from

Creation-100 - . what was the first two things god made? the heavens and the earth. creation-150. what was adam’s job

Chapter 3: Creation - . by ross whittaker and zack hayes. creation stories. the stories of creation vary from culture to 1. Creation - . “in the beginning” only god existed, nothing or no one else… just god! but as the “creator god”

On the road to the creation of situation-adaptive dialogue managers - . ajay juneja akj@andrew.cmu.edu 11-716 dialog