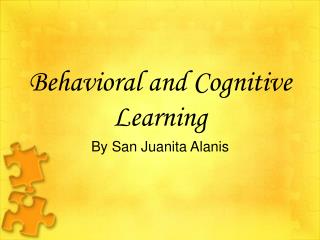 learning theories behavioral vs. cognitive - . by robert h. pryor. behaviorism. behaviorism is a theory of learning

Behavioral vs. Cognitive Views of Learning - . these traditions in learning theory have existed for decades. they give

Cognitive and Behavioral Interventions - . spring 2011 . principles of cognitive functioning. cognitive therapy: based on

Cognitive and Behavioral Theories - . sarahi morales project #2 edtc 3320. b.f. skinner was identified as the most