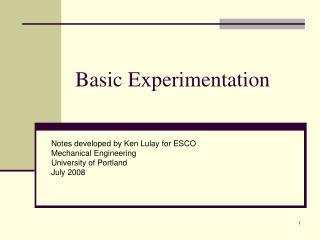 Basic Experimentation. Notes developed by Ken Lulay for ESCO Mechanical Engineering University of Portland July 2008. What to bring? . Attendees should bring: Scientific calculator Ideas for experiments they would like to do at ESCO The following should be provided:

BASIC EQUIPMENT - . acct-bvp1-4. students will be able to demonstrate proper set-up and use of basic production

The Basic Eye Examination - . learning objectives. at the conclusion of this presentation, the participant should be able

Basic Training - . getting started. a free, unbiased service, sponsored by the washington state office of the insurance

Basic Nutrition - . you will be given 10 seconds after each question before the slides advance to the answer page. to

IS 3315: Manufacturing Systems - . part 1: the organisation of manufacturing firms understand the basic business

IS 3315: Manufacturing Systems - . part 1: the organisation of manufacturing firms understand the basic business

Basic Vibration Analysis - . . what is vibration? terminology equipment how vibration is analyzed types of vibration

ICT in Basic Education - Where are we? a. scope of i ct use in basic education b. manner of introduction of ict in