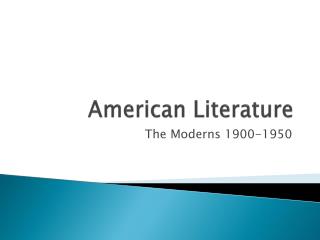 American Literature. The Moderns 1900-1950. What was one event that changed the American voice in fiction?. World War I. Read FDR’s quote on p. 524. Why is fear something to be feared?. Think about FDR’s statement. Be prepared to complete a Do Now regarding that statement.