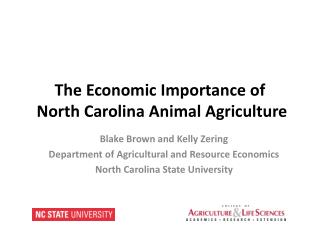 The Importance of Agriculture - . hunter &amp; gatherers. 99% of mankind’s existence on earth has been as a

The Importance of Agriculture - . everyone needs agriculture. georgia msaged7-1: students will express the importance of

Importance of Medicare Part D in North Carolina - For all of your nc medicare part d, medicare in north carolina, &

THE UNIVERSITY OF NORTH CAROLINA - . university charter: 1789 faculty of medicine: 1879. professionalism and

The Hellbenders of North Carolina - . who are they and what do they mean for our survival?. what is a hellbender?.