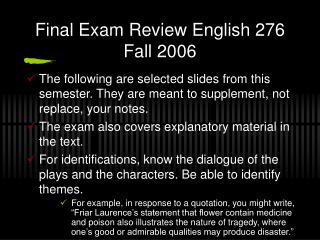 Final Exam Review English 276 Fall 2006. The following are selected slides from this semester. They are meant to supplement, not replace, your notes. The exam also covers explanatory material in the text.

Final Exam - . circle a b or c once you receive your test 80 multiple choice choose one open response to complete return

Astronomy Final Exam Review - . the answers. pseudoscience is a study that tries to explain scientific phenomenon. it

Final Exam and Retakes - . there are no retakes allowed after the final exam. you are allowed as many retakes on exams

CEA Final Exam Review - . these are the topics that will be on the final. . login information to access powerpoints and

Review for Final Exam - Fashion merchandising… a look back…. review for final exam. chapter 1 – what is fashion?.

Final Exam Review Notes - . power points are in order of the review *if you can’t locate the answer, please let me