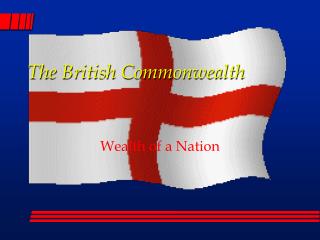 The British Commonwealth. Wealth of a Nation. Why could Britain gain colonies. # 1 Belief in mercantilism – the wealth and power of a nation depends upon how much gold it posses. ( this came from Aztecs and Incas). For nations that did not control gold mines Imperial Commitments and the Influence of the British Commonwealth - . during this time the british empire consisted of

THE COMMONWEALTH FUND - The commonwealth fund. geographic variation in health system performance: findings from the

The Commonwealth Gymnastics - . by erin. contents. history of the commonwealth the men's medals in 2010 the woman's

the British - Appearance / ethnicity . history. the british. culture. attitudes . benjamin zephaniah - the british as you

The Commonwealth of Byzantium - . questions to consider as you work through this chapter. how did the byzantine empire