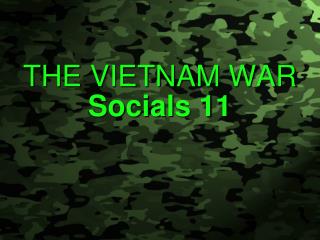 THE VIETNAM WAR Socials 11. PHASE 1 - A WAR OF COLONIAL INDEPENDENCE AGAINST THE FRENCH. Vietnam had been a French colony under the name of French Indochina (along with Cambodia and Laos) Vietnam began to fight for its independence from France during WW II

Teacher-of-History - .com. the vietnam war how did the usa become increasingly involved in vietnam?. how did american

French Immersion is… - . a program designed specifically for students who do not speak french at home a long term

Goldfish in Canada. By Jessica H - . here i am at niagara falls swimming here i go i am going down the water fall yey!!!.