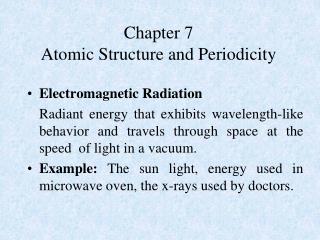 Chapter 7 Atomic Structure and Periodicity. Electromagnetic Radiation Radiant energy that exhibits wavelength-like behavior and travels through space at the speed of light in a vacuum. Example: The sun light, energy used in microwave oven, the x-rays used by doctors. Waves. Molecular Structure - . both atoms and molecules are quantum systems we need a method of describing molecules in a

Atomic Structure - . from bohr to quantum. richard lasky – summer 2010. models of atoms. nobody has ever seen the