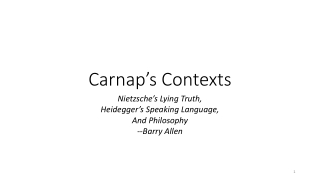 Charting the Terrain of Knowledge-1 - . epistemology– the area of philosophy that deals with questions concerning

Educational Philosophy: The Intellectual Foundations of American Education - . what is philosophy?. the study of theories

Embodied Knowledge - . aristotle’s response to plato. the questions of philosophy. philosophy—search for wisdom

Epistemology Review - . what is knowledge?. epistemology. one of the ‘pillars of philosophy” explores the nature,