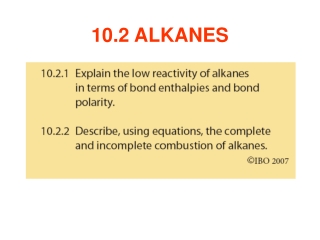 10.2 ALKANES. Combustion of Alkanes. The most familiar reaction of the alkanes is combustion. Like almost all organic compounds, the alkanes areflammable and oxidise when burnt in the air to form carbon dioxide and water if sufficient oxygen is present. 3. Organic Compounds: Alkanes and Their Stereochemistry - . based on mcmurry’s organic chemistry , 7 th edition.

Alkanes and Alkenes - . processing alkanes cracking, reforming, isomerisation. how is it carried out? c – al 2 o 3 and

Topic: Naming Alkanes - . do now: draw the possible bonds a single carbon atom can have if it has a bonding capacity of

Alkenes and Alkanes - . learning objectives. use general formulae to identify alkenes and alkanes use chemical tests to

Properties and reactions of Alkanes - . alkanes are saturated hydrocarbons. this means they contain only carbon and