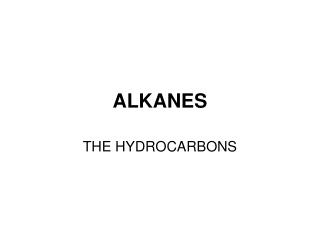 Alkanes vs. Alkenes - . a stinky lab turned into an un-stinky power point presentation. what do you think these words

Organic chemistry Alkanes = carbon chains - . alkanes - nomenclature. the name of every organic molecule has 3 parts: the

Alkanes and Alkenes - . learning objective – what are the differences between alkanes and alkenes?. alkanes – a

Unit 2 – Alkanes and Chemical Reactions - . structure and stereochemistry of alkanes nomenclature of alkanes and

Alkane - . introduction. alkanes are saturated hydrocarbon, that is they contain only carbon-hydrogen (c-h) and

4.1 Alkanes - . hydro carbon s are compounds that are only composed of hydrogen and carbon . which of the molecules above

Alkanes and Alkenes - . processing alkanes cracking, reforming, isomerisation. how is it carried out? c – al 2 o 3 and

3. Organic Compounds: Alkanes and Their Stereochemistry - . based on mcmurry’s organic chemistry , 7 th edition.