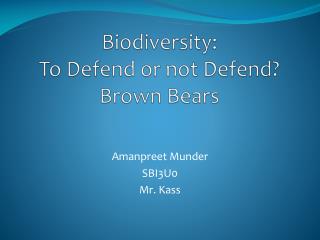 Biodiversity: To Defend or not Defend? Brown Bears

Biodiversity: To Defend or not Defend? Brown Bears

Polar Bears in the Wild - . efforts to protect this endangered species. summer 2010 workshop in biology and multimedia

“He, who wants to defend everything, defends nothing.” - --- frederick, the great. focus of a security plan

APES-2/6 - . please have out part a from yesterday- thanks quiz and brochures back tomorrow. loss of species how have

Biodiversity - . the biosphere. the sum of earth’s ecosystems, the biosphere encompasses all parts of the planet

Biodiversity What is it? Why is it important? What can we do? - Anja murray an taisce- the national trust of ireland.

To defend or not to defend? - . polar bears. by: manjot mangat. polar bear facts. vulnerable 60 % of the world's polar

Chapter 9 Sustaining Biodiversity: The Species Approach - . 9-1 what role do humans play in the extinction of

Biodiversity - . warm up question: answer in your notebook  what is your favorite animal? why? . biodiversity : short

Brown Bears - . what do you know?. where do they prefer to live?. indoors yes no forest yes no zoo yes no.