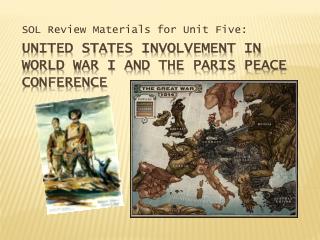 SOL Review Materials for Unit Five: . United States Involvement in World War I and the Paris Peace Conference. American Neutrality, 1914 - 1917. Wilson’s campaign bragged that the President had kept us out of war. How does this sign show that he supported unions, as well? .

WORLD WAR I Chapter 30: The War to End War - . was it in the best interests of the united states to stay neutral or

The United States and WWI - . the decision to fight. cultural ties. most americans supported the allies because of

US Involvement In The Second World War - . presented by giorgi modebadze. trying to maintain neutrality after world war

Treaty of Versailles/ 14 Points - . part 1. essential question : what were the major provisions of wilson’s 14 points

The Treaty of Versailles (At the Paris Peace Conference) - . signed june 28, 1919—exactly 5 years to the day after

A Flawed Peace - The treaty of versailles. a flawed peace. paris peace conference. held at palace of versailles in

WARMUP #1 - . just before world war i, about one-third of all americans were first- or second-generation immigrants. when