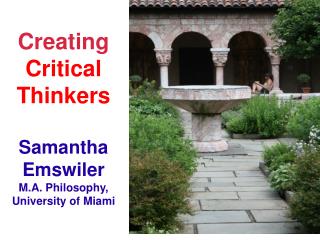 Creating Critical Thinkers Samantha Emswiler M.A. Philosophy, University of Miami. “A pupil from whom nothing is ever demanded which he cannot do, never does all he can.” J.S. Mill. Step One: Recognizing the extent of the problem with lack of critical thinking skills.

Empiricism and the Philosophy of Mind 1 - . dispensing with the given– sense data first. the project. sellars’ aim

The Philosophy: Why? - . ray cross, president. introduction. overview societal and cultural changes changes in the work

Philosophy and Einstein's Discovery of the Theories of Relativity - . john d. norton center for philosophy of science and