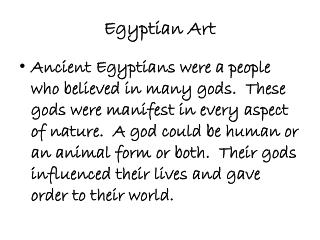 Egyptian Art. Ancient Egyptians were a people who believed in many gods. These gods were manifest in every aspect of nature. A god could be human or an animal form or both. Their gods influenced their lives and gave order to their world. . Topic 1 The History of Oceanography - . geol 2503 introduction to oceanography. early evidence of humans and the sea. by

The making of Egyptian Papyrus - . papyrus paper. long before there were textbooks, newspaper, or email, the egyptians