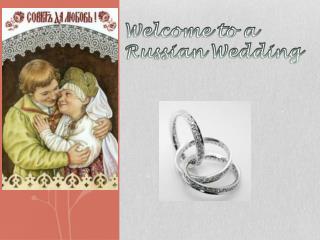 Welcome to a Russian Wedding. How does a Russian engagement look like ?. In America, when two people are being engaged, the ring would automatically be given because it is a tradition. The wedding occurs at a church, or either there could be a civil wedding. Russian Wedding Tradition - . by amelia ecevido. what am i looking for?. does the culture celebrate on one day or many

Russian Wedding Tradition - . part 1. ransom for the bride (vykup nevesty). the groom is coming to the bride's home with

Welcome to Russia The Russian cities - . moscow. moscow is the capital of the russian federation. it’s one of the

A Russian Freeway - . this russian federal freeway goes from moscow to yakutsk in siberia. this road has no asphalt, even

Ways to Welcome Your Guests to Your Wedding - Making guests feel welcome is an important aspect of your wedding,

A Russian Highway - . this russian federal highway runs from moscow to yakutsk city in siberia. the road doesn’t have

A Russian Freeway - . this russian federal freeway goes from moscow to yakutsk in siberia. this road has no asphalt,

Welcome to a - . school. dale l. kohlsmith director of training numatics, inc. the heart of every numatics valve:. the

Welcome to a - . premier designs jewelry show!!!. today is about fashion, fun &amp; diva $$$. whoever has the

Reasons To Become A Wedding Planner- Wedding Pathshala - A wedding planner certainly doesnu2019t save lives, however,

How to plan a Wedding? - . by: catherine driver. *picking the date and color scheme and a time format, and possible

Welcome to the wedding feast of the Lamb! - . rev 19:9 the angel said to me, &quot;write: 'how blessed are those who