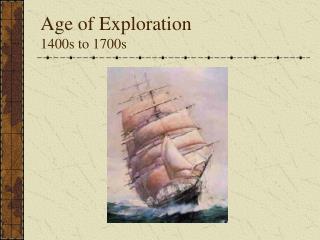 Age of Exploration 1400s to 1700s. Motives. Search for new trade routes wanted to find a quicker way to Asia Desire for new products Crusades and travels of Marco Polo stimulated an interest in Asian goods

The Age of Exploration - . the historical setting for exploration. europe wanted trade world divided into independent

Crusades by Elizabeth Laird - . a fact and fiction story. image from

The Crusades - . by jenessa orpilla anisha varghese. what were the crusades?. the crusades are a series of holy wars that

List reasons for European Exploration and Colonization - Jump start : make sure the following are in your notebook. maps,

European Exploration - . what factors encouraged the european age of exploration? . from the 1400s to the 1700s, europe

The Age of Exploration - . chapter 13. exploration and expansion . motives and means first portugal and spain then dutch

Exploration of the Americas - . why explore?. god spread christianity beyond europe send missionaries to convert people

The Rise of Absolute Monarchies (1400’s-1700’s) - . first things first… what is an absolute monarchy? absolute