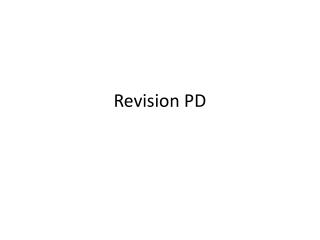 Revision PD. Key Facts 1. Mostly diagnosed after the age of 50 years but some individuals diagnosed earlier-in their 30s. Genetic differences between late onset (PARK 1 and early onset (PARK 2) genotypes. About 200 per 100,000 in UK have PD. More men than women

FORD TIP? - . or perhaps drop fit? or pod rift? it for pd the internet anagram server:

APPEAL, REVIEW &amp; REVISION - . purpose in each case not only justice must be done, but also it must be seen to

Let’s Take a Look Back Reviewing your PD Plan - . guskey’s three phases of evaluation. need to image from summer