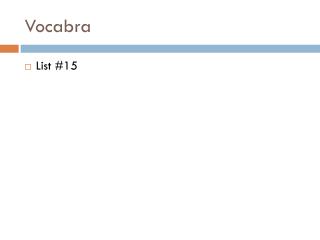 Vocabra. List #15. veto. Theodore had planned on taking his mom’s brand new car on his Friday night date, but she vetoed that idea. The principal informed the student council that she has the power to veto any of its decisions if she disagrees with them Definition: to reject. prominent. Vocabra - . list 2. fragile. mrs. malmo put away all her fragile glass knickknacks whenever her one-year-old grandson

Vocabra - . list 21. abolish. the student council hopes to abolish the school rule against holding hands in the hallway.

Vocabra - . list #6. jovial. martha’s grandfather was the only jovial relative she had. all the others were always

Vocabra - . list 17. morale. the football team’s morale was sinking, so the cheerleaders did several more cheers than

Vocabra - . week 10. taboo. since she has already broken one dish, it is now taboo for angela to touch her mom’s china.

Vocabra - . week 5. intricate. mrs. smith crocheted intricate patterns into her afghans. the plot of the book was so

Vocabra - . list 13. synopsis. paula studied for her biology test by reading the chapter synopsis. she should have read

VOCABRA 16 - . i ndignant. the hendersons were indignant when the homeowners association told them they could not paint

Vocabra #14 - . seethe. maggie thought her parents would seethe over her cheating. but it was worse than that; they sat

Vocabra 24 - . culmination. for susan, the culmination of the weekend’s festivities was when her favorite poet read her

MORE VOCABRA! - List 25. more vocabra!. alternative. there are many alternatives to eating peanut butter and banana

More Vocabra - . list 2. whimsical. the children’s play features a whimsical tango by a frog and a swan. the ballroom

Vocabra List 5 - . spar. roberto liked to sneak into the gym late at night to watch his brother spar with the other