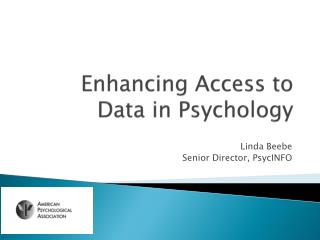 ACCESS TO SUCCESS IN AMERICA: What do the data tell us? - . access to success provosts meeting baltimore, md january 9,

Introduction to I/O Psychology - . what is i/o psychology?. a branch of psychology that applies the principles of