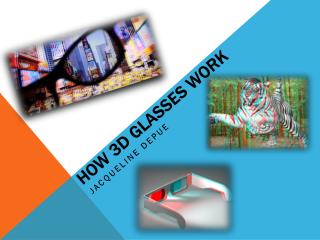 How 3D Glasses Work. Jacqueline DePue. Background of 3D. In 1893, William Friese -Green created the first anaglyphic 3D motion picture by using a camera with two lenses. During this time, the first lenses on 3D glasses were typically red and green . How Do 3D Glasses Work? - . caitlin riddle 2005. types of paper 3d glasses. anaglyph pulfrich polarized. what can be seen

Stereo 3D Technologies in Computing, Entertainment and Art - A reminder of today and a look at tomorrow by peter