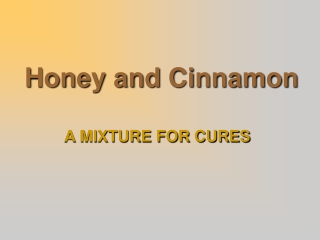 Honey and Cinnamon. A MIXTURE FOR CURES. INTRODUCTION. It is found that a mixture of Honey and Cinnamon cures most diseases. Honey is produced in most of the countries of the world. Ayurvedic, as well as Yunani medicine, have been using honey as a vital medicine for centuries.