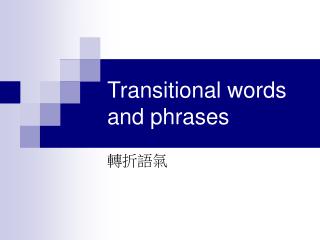 How to Give an Academic Presentation - . verbal communication （口语表达） • simpler vocabulary • longer

Phrases &amp; Clauses - . and why it matters…. phrases and clauses . how are they alike? they are both a group of

Words and phrases learned last time: - . deep down; put one’s finger on; throw oneself into; despair; browse through;

Confused and Misused Words and Phrases - . dude, the right word is affect , with an a. no, you’re wrong. the word

Fluency Phrases for Second and Third Grade - Why practice phrases?. these phrases contain the first 100 words from the

Lesson 3 Planning Performance - . performance management is a collaborative effort between supervisors and employees.